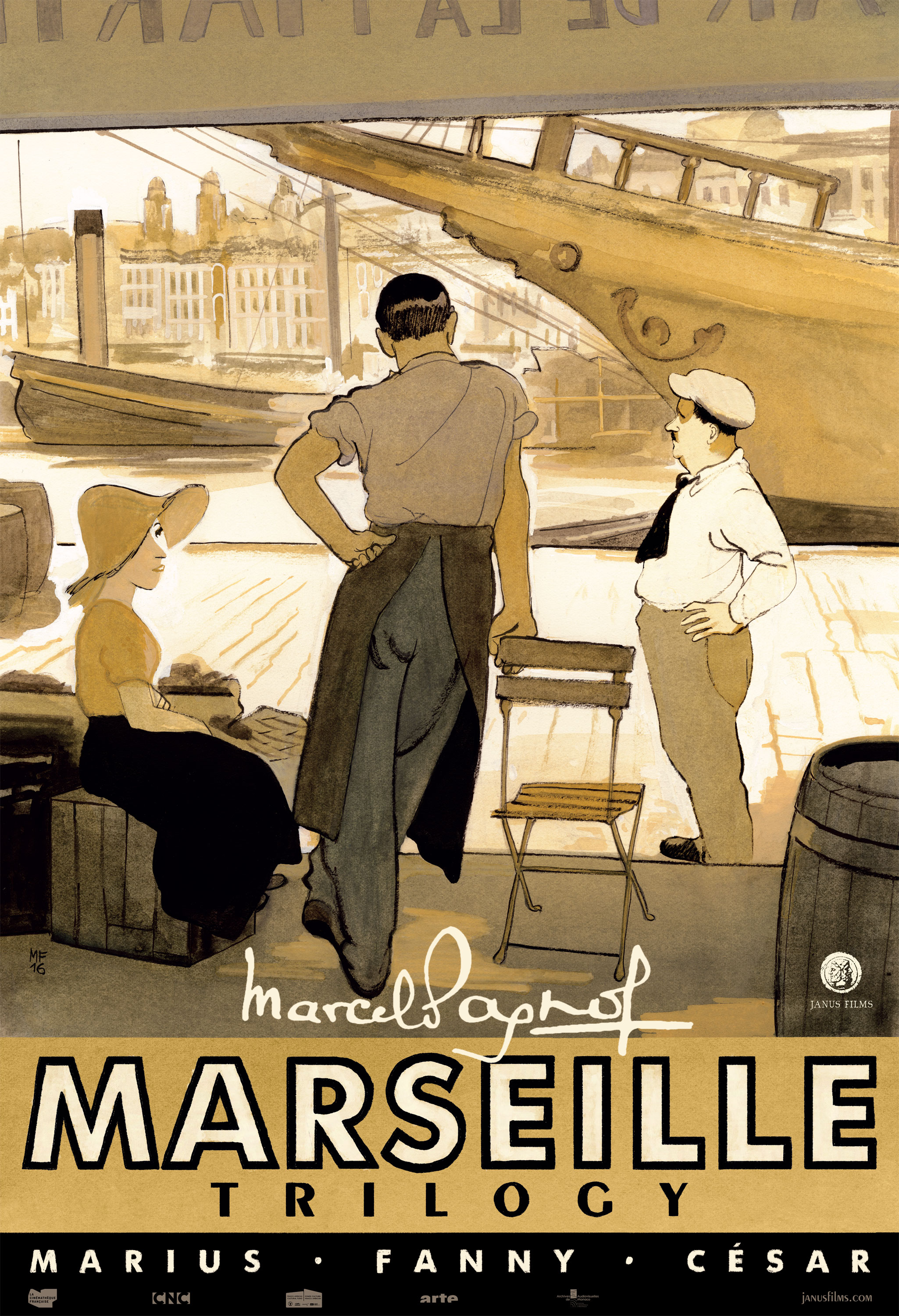 Marcel Pagnol's Marseille Trilogy is noteworthy in many ways.   The success of these films saved the Hollywood studio, Paramount, from bankruptcy in the 1930's.   The exterior scenes are filming in Marseille, giving us a view of what the city looked like in that era.   The most of the actors, are from Marseille, and speak with authentic accents.  A collection of the three films in the Marseille Trilogy; Marius, Fanny and Cesar have been remastered, and sub-titled in English.  The collection also includes commentary on the production.  A Copy of this collection is available for viewing from the Polk State, Lakeland Library in DVD format. (Ref: LKAVLIB PN1997.A1 M37 2017 DVD 2488)

Plot Summary: Marius, the son of a Marseille Barkeeper, Cesar, is torn between two loves: his love for his childhood sweetheart, Fanny, the daughter of a local fishmonger; and his love for the sea, to which he longs to sail; and leave behind his life in Marseille.  Although Fanny loves him deeply, she assists him to escape; knowing that he will never be happy with her if he does not pursue his dream.

Plot Summary:  After Marius departs Marseille for a five year stint on a ship headed to the Indian Ocean, Fanny finds herself pregnant with his child.  She must decide if she wants to raise an illegitimate child alone, or accept a marriage proposal from the elderly, Panisse, a prosperous sail maker, who always longed for a child, is happy to accept her child as his own in a marriage based on respect, but not love.

Plot Summary: After the death of Fanny's husband, Panisse, the barkeeper Cesar, works to reunite his godson, Cesariot with is biological father, Marius. Marius is actually Cesar's estranged son, and Cesariot is both his godson and grandson, a secret that his mother Fanny reluctantly reveals to him.  The film resolves itself by uniting Marius, Fanny , Cesar and Cesariot as a family.

Other films based on Marcel Pagnol's Marseille Trilogy

In this movie, the story line of the original Marcel Pagnol Trilogy is consolidated, and the time line is shortened, and it is filmed in English.   However, it is filmed in Marseille, and contains some magnificent panoramic shots, (in fact, it won the academy award for cinematography).   Although the cast are European actors, they were all well known to the American audience when this film was made.  A Blue-Ray version of this film is available at the Polk State Library, Lakeland Campus.

There have been other remakes of the Marseille Trilogy. the French actor, Daniel Auteuil released his version of Marius, and of Fanny in 2013.  There are rumors he may eventually make the third film in the trilogy, Cesar.