When we read, we learn new things. When we read together, we learn things not just about the book, but also about each other. When we all get "On The Same Page", we make better collaborators, problem solvers, and people in general. We understand our world a little bit better by seeing it from a different point of view. We become a community of engaged, educated, and empathetic individuals. We Think. We share. We grow. 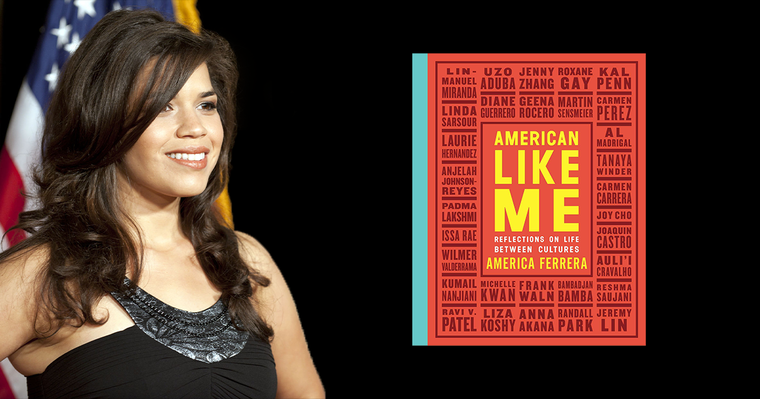 Listen to America Ferrara read an excerpt from her book on soundcloud!

America Ferrera Asks, "Who is American?"

America Ferrera may be a household name thanks to TV shows and films like “Ugly Betty” and “Sisterhood of the Traveling Pants,” but the actress reveals in a new book that her moniker was often a source of isolation and embarrassment growing up.

The actress channels her struggles for self-acceptance in a new book called, “American Like Me: Reflections on Life Between Cultures.” The book, which was released last week and has already hit No. 1 on the Amazon charts, features a collection of first-person stories from Ferrera and more than 30 friends, peers, and personal heroes, who write about the struggles of growing up between cultures in the United States.

The book begins with Ferrera recalling how first days of school were “always hell” for her. The teachers, she writes, would see her name on the attendance list and “want to know what my real name is.” Born in Los Angeles to Honduran parents, the 34-year-old writes that it took her a long time to find her identity amidst a sea of “blue eyes and lighter skin.”

The feelings of trying to fit in are shared by the book’s contributors, which include Lin-Manuel Miranda, “Orange is the New Black” actress Uzo Aduba, “Insecure’s” Issa Rae, “Fresh off the Boat’s” Randall Park, Olympic figure skater Michelle Kwan, and author Roxane Gay. Ferrera says her goal for the book was to represent for the millions of people in America who share the same experiences.

On “The View” last month, the “Superstore” actress says she yearned to see her identity reflected in the larger American narrative and was “shocked” that a book like this didn’t already exist.

“I grew up feeling not American enough, but also not Latina enough,” she told the co-hosts. “You’re both, but you’re also neither.”

Ferrera herself has been an outspoken advocate for human and civil rights. The actress was the opening speaker at the Women’s March on Washington last year and is a co-founder of HARNESS, an organization that aims to amplify the cultural narrative around social justice.

“American Like Me: Reflections on Life Between Cultures” is out now and available on hardcover, Kindle and audiobook through Amazon.com.